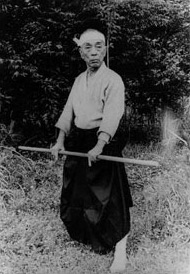 Toshitsugu Takamatsu was born on March 10th 1887 in Akashi. His birth name was Hisatsugu, but he later changed it to Toshitsugu. Because of his bad health and frailness he started practicing martial arts. At first he trained with his grandfather in Shinden Fudo Ryu. Throughout his first year of training he was used as the uke (attacker) and very often his knees and elbows were bloody from the numerous falls. During the second year he started learning technique basis and at the age of 13 he received the title of master, which was considered to be extremely early. After Shinden Fudo Ryu his grandfather taught him other fighting styles. In 1900 he learned Takagi Yoshin Ryu from the 15th soke Yoshitaro Tadafuse. In 1904 a famous master arrived in Takamatsu’s town. That was Ishitani Matsutaro Takekage, who later taught Takamatsu Kukishinden Ryu happo hiken jutsu, Hon tai Takagi Yoshin Ryu, Gikan Ryu koppo jutsu and Shinden Muso Ryu. Takamatsu sensei spent a part of his life in China. It is assumed that this was for his personal test in level of mastery of martial arts. During his stay in China he participated in numerous fights and challenges, which of course he never lost. After the various adventures in China and after some time spent in the wilderness (in Japanese mountains), he returned home in 1919. 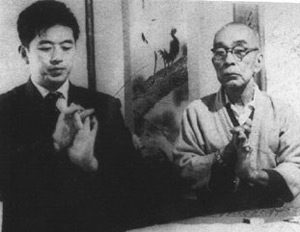 In his 30s he became unbeatable in battles and acquired great spiritual strength. His warrior name was “Mongol tiger”. Takamatsu was a technical consultant for the movie “Shinobi no mono”, worked as the president of the Fighting association for Japanese youth and he also received national recommendations from Jujutsu and Bojutsu masters. Takamatsu sensei died on the 2nd of April 1972 at the age of 85. He was cremated in a cemetery in Nara, and Hatsumi sensei had a special assignment, namely permission, to host the funeral.